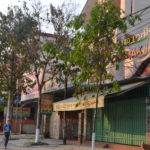 To start, just some short information about me:

After working as a lecture at the University of Passau, Department of Southeast Asian Studies from 2016 to 2020, I currently finish writing my PhD Thesis on peri-urban space in secondary cities in Vietnam.

My research focuses on processes of (peri-)urbanization and modernization as well as state-society relations in Vietnam, especially processes of self-organization and citizenship. I am especially interested in small and medium sized towns. I conducted field research in Vietnam in 2010 in Soc Trang (Mekong Delta), in 2014 in Buon Ma Thuot (Dac Lac province) and in 2014/15 in Tam Ky (Quang Nam province).

And finally, I am really passionate about Vietnam and cities. In the following, I will try to share this passion with you.

I will also use this site to publish some of the photos, we took during the fieldwork in Buon Ma Thuot and Tam Ky, Vietnam in 2014 and 2015.

If you are interested, there are more information on my background, research, projects and teaching on this site.